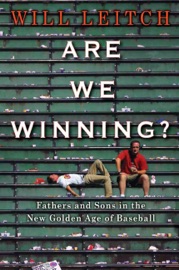 A hilarious tribute to baseball and to the fathers and sons who share the love of the game.

Are We Winning? is built around a trip to Wrigley Field to watch the St. Louis Cardinals play the Chicago Cubs--the "lovable losers" to most fans but the hated enemy to the Leitch men. Along for the ride are both Will's father, the gregarious but not-exactly demonstrative Midwestern titan who, despite being a die-hard Cards fan and living his whole life just 200 miles south of Chicago, had never been to Wrigley Field before this game, and Will's college friend, a lifelong Cubs fan. The Cardinals have recently fallen out of the pennant race, and the Cubs, as it turns out, are attempting to clinch the division on this Saturday afternoon in September. The pitchers are Ted Lilly for the Cubs and Joel Pineiro for the Cardinals. It's just a regular game. Play ball.

The book unfolds in half-inning increments where Will gives one-of-a-kind insight on the past, present, and future of the game--from Pujols' unrivaled greatness to the myth that steroids have ruined baseball. Along the way, he shares memories of his father and growing up in the small town of Mattoon, including the year his dad coached his Little League team and nicknamed a scrawny kid "Bulldog," and an unlikely postgame episode involving a biker bar and Mr. Holland's Opus. And there is beer. Lots and lots of beer.

Are We Winning? is a book about the indelible bond that links fathers and sons. For the Leitch men it's baseball that holds them together--not that either of them would ever be so weak as to admit it. No matter how far apart they are or what's going on in their lives, they'll always be able to talk about baseball. It's the story of being a fan, a story about fathers, sons, and legacies. And one perfect game.

More by Will Leitch