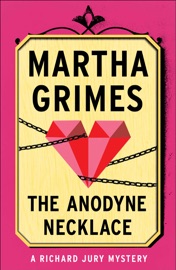 The third in the bestselling Richard Jury mystery series by Martha Grimes.

A spinster whose passion was bird-watching, a dotty peer who pinched pennies, and a baffling murder made the tiny village of Littlebourne a most extraordinary place. And a severed finger made a ghastly clue in the killing that led local constables from a corpse to a boggy footpath to a beautiful lady’s mansion.

But Richard Jury refused, preferring to take the less traveled route to a slightly disreputable pub, the Anodyne Necklace. There, drinks all around loosened enough tongues to link a London mugging with the Littlebourne murder and a treasure map that would chart the way to yet another chilling crime.